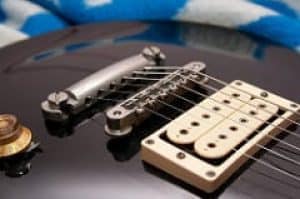 Les Paul guitars are universally acclaimed for their excellent quality. The problem with original Gibson Les Pauls is that they’re generally extremely expensive.

So does that mean you can’t enjoy the LP benefits? Not quite—all you need to do is to find the best Les Paul copies instead.

There are plenty of reasons why the Les Paul guitars are among the most famous and popular guitar models in the world.

Let’s just accept that it sounds great and looks terrific. It has been used extensively since the 1950s by musicians more famous than you or I will ever be.

It’s just that they’re so expensive. So it’s a good thing that top Les Paul Copies offer similar terrific features at a fraction of the usual price.

This is arguably one of the best Les Paul copies for beginners. What you need to consider first is that this is a package. It means that you get not just the guitar but also the various accessories you’ll most likely need to start playing and practicing at once.

These accessories include the guitar cable, the picks, and the Epiphone guitar strap. You’ll get the clip-on headstock chromatic tuner, so you can make fine tuning adjustments right away. 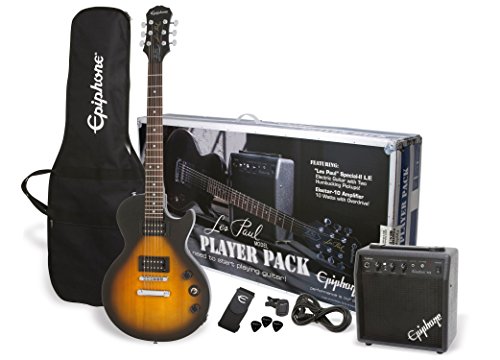 There’s also a portable Epiphone Electar 10-watt amp with a 6-inch speaker what has a headphone jack so you don’t bother a roomy when you play. Finally, you even get software that includes introductory guitar lessons.

Of course, all these are just accessories, and the guitar is the most important piece of the package. This features the classic LP profile for the solid wood body, plus 2 open-coil humbuckers. These humbuckers provide you the hum-free tone that you may get from single coil pickups.

This is the bestselling guitar from Epiphone, so it’s not exactly bad or expensive. It’s a guitar meant for beginners, who can then start on becoming familiar with the feel and sound of a Les Paul.

This has the authentic looks of a Les Paul, make no mistake about that. The trademarked Les Paul body design is present, and of course you also have the all-mahogany body. This also has the “1960’s” SlimTaper neck bolted on. It’s made of mahogany, while the fingerboard is rosewood with dot inlays.

Then you also have that famed sound of a Les Paul, courtesy of the 2 hot open-coil Epiphone 700T and 650R humbucker pickups.

Since this is an Epiphone guitar, its standard equipment also includes the 500K potentiometers for the Master Volume and Master Tone controls. You also get the 3-way pickup selector toggle switch and exclusive non-rotating heavy-duty output jack.

The sustain is amazing. That’s due to the nickel hardware, which includes the LockTone locking Tune-o-matic bridge and StopBar tailpiece. Try this on a game like Rocksmith (check other best guitars for Rocksmith here), and you’d be astonished by the results.

Musicians want certain things from their guitar: the right feel and tone, and impressive look, and a great overall quality. That’s what you get from the ESP Edwards Les Paul.

That’s also what you get from the LTD EC-100 series, and yet you also get an affordable price too. Among the guitars from this series, the EC1000VB stands out because it really offers terrific performance to go along with its amazing appearance.

The look is nicely vintage, and that applies to the body, neck, and headstock binding. You also get the gold hardware that really shrieks for attention.

Then components are all upper end in quality, and they include a Tonepros locking TOM bridge and tailpiece, LTD locking tuners, and active EMG 81/60 pickups.

Basically, you now have a lightweight Les Paul that’s extremely easy to play. That allows you to spend countless hours improving your skill, or just passing time making music.

The tone is marvelous, as you have the crunch and the gain that you can expect from a real Gibson Les Paul.

In the end, this is actually a Les Paul, just without the Gibson brand and the price that can make you wince.

Epiphone has long been known as a smart man’s Gibson, especially if you’re looking for a Les Paul. It’s understandable if you like a Gibson Les Paul due to the sound, but you also get that from this Epiphone Les Paul Standard.

Ever since the first model of the LP Standard came out more than 40 years ago, people have realized that the Gibson Les Paul sound can be replicated—at a much lower cost.

You get all the features you can expect from an authentic Les Paul. These include a solid mahogany body and a maple top to give you that sustain and tone you’re looking for.

Like other Epiphone LPs, you also get that 14-degree headstock that offers more sustain without the tuning hassles. Finally, there’s also the rosewood fingerboard with trapezoid inlays.

The mahogany neck has been hand-set, so you have the satisfying resonance you want. The tone is also sustained and smooth because of the medium-jumbo frets.

For pickups you have 2 Alnico Classic humbuckers, so you still have that rich and warm tone that LP fans want. It’s been made to give you a way to play without any humming from the microphone. Thanks to all premium Epiphone parts, that’s been achieved.

This also features the classic fully adjustable bridge that’s been seen on Les Paul guitars for the last 50 years. But Epiphone has even improved on this with new design that auto-locks the bridge and tailpiece.

The toggle switches have been made with all metal parts and durable spring-steel contacts, so this component can last for many years. Even the output jack has been specially made, as it has heavy-duty spring steel and an upgraded contact shape for greater reliability.

If you’re looking for good Les Paul type guitars with a vintage look, it’s easy to see why. That’s especially true if you’re an older guitar player who grew up with the more traditional single-cutaway guitars.

But you don’t have to cough up a lot of money for a true vintage Gibson. Those are hard to find, and even if you do find one the price can really become a problem. The obvious solution is to just get the 245STVC SE 245. 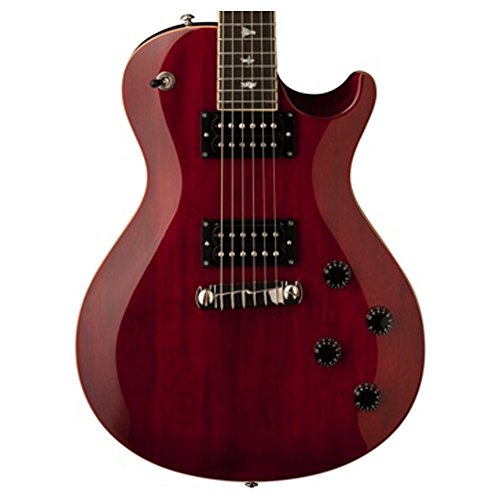 The Paul Reed Smith brand makes sure to accommodate your preferences, so they did things differently with this model. Usually, PRS uses a 25-inch scale for its guitars. Now they’ve shorted that a bit with the 24.5-inch scale length for this model. Not only will this be more familiar to you if you’re used to traditional guitars, but tuning the guitar is also much easier this way.

Like any worthy Les Paul copy, you’ve got mahogany for the body and neck. The fretboard is also made from rosewood. However, since this is a Paul Reed Smith guitar you also get the famous PRS bird inlay.

The hardware is nickel, and you get the specially-designed treble and bass pickups, along with the tuners and the stoptail bridge. There’s a pair of volume and tone controls for each pickup, along with the 3-way toggle pickup switch.

What Are Les Paul Copies?

Les Paul copies are guitars that have the defining characteristics of the Les Paul guitar save one—the price. The authentic Les Paul Guitars are made by Gibson, and the copies are made by other brands.

In a few cases, the copies are authorized by Gibson itself. The prime example of this is the Orville version of the Les Paul. Gibson authorized the brand to make the copies for the Japanese market.

Gibson even provided the Gibson materials for Orville to use. It’s basically a Gibson Les Paul with just a superficial name change.

Other copies are more affordable versions of the Les Paul made by other manufacturers. Gibson has been making a legal fuss about their existence in some cases, and that’s why they’re often referred to as Lawsuit Les Paul guitars.

Now that you know what a Les Paul copy is, you should also learn what makes for a good copy in the next section.

How to Choose a Les Paul Copy

There are several ways to go about choosing a Les Paul copy. Of course, you first have to check the price. If the price is similar to the price of the original, then you may as well get the original. This is what’s called a “no-brainer”.

Now if you have a much more affordable Les Paul copy, you then will want to check just how faithful the copy is to the original. It’s like tasting a dish to see if a chef followed a famous recipe properly.

If you love a particular dish made in a certain way, then when you get another taste of the dish at a later time you’d want the cook to replicate the recipe.

If it’s too different, then the taste of the dish would be different. In some cases, the taste would be worse.

The same goes for the Less Paul copies. If the features of copy are too different from the original, then it’s not really much of a copy at all. It doesn’t have the right to be called a Les Paul, and in many cases it would be a very inferior “copy”.

You then need to know which type of Les Paul the copy is trying to emulate.  There are numerous Gibson Les Paul versions, after all. These include the LP Traditional, LP Standard, LP Supreme, and the LP Custom

Finally, you may want to buy an LP copy that changes a certain aspect of the original in order to somehow improve on it.

The fact of the matter is that there Les Paul does have some issues that may annoy or bedevil their owners, despite its overall excellence.

These changes may include:

So what advantages do you enjoy when you get a great LP copy? Continue on to the next section…

Why Buy a Less Paul Copy?

So many people insist on buying a copy of a Les Paul guitar. There are several good reasons for this.

Before you make your final choice, you really ought to read numerous Les Paul Copies reviews so you know what to expect. But if you just want a firm recommendation, you should really take a closer look at the PRS.

It’s true that the Epiphone and ESP brands are excellent, but there’s something about the Paul Reed Smith guitar that somehow makes it shine.

Part of its appeal is that Paul Reed Smith is notorious for only allowing the best guitars to carry his brand. He’s meticulous that way.

All the features you can find on this LP copy bears evidence on how diligently the people at PRS made sure you get a fantastic guitar.

This is also a very popular guitar for professional musicians all over the world. It’s not just good. It’s so good that musicians trust their careers with it.

The sound, the durability, the ease of play, and the fantastic looks all combine to give you a heck of a guitar with the Paul Reed Smith Guitars 245STVC SE 245. Among all the best Les Paul copies, this one really rocks.